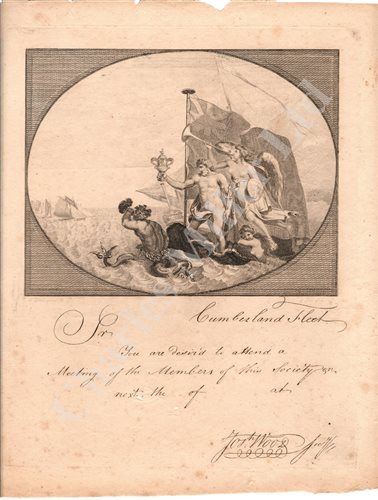 an unused and undated paper invitation, signed by Joshhh. Wood (Hon. Sec.?) “to attend a Meeting of the Members of the Society”, printed in running script below an allegorical black and white engraving by J. Hall, 1775 (after J. Hitchingham) featuring Poseidon(?) holding the Cumberland Cup aloft, with racing cutters at sea beyond, 11 x 8.5in. (28.5 x 22.5cm.), unfolded, minor foxing, a very rare survival

The so-called ‘Cumberland Fleet’, known since 1830 as the Royal Thames Yacht Club, was founded in 1775 when Henry, Duke of Cumberland, the brother of King George III, put up a silver cup for a race on the River Thames and formed the ‘Cumberland Fleet’ to challenge for it. By virtue of its foundation date, it is recognised as the oldest continuous operating yacht club in the world.