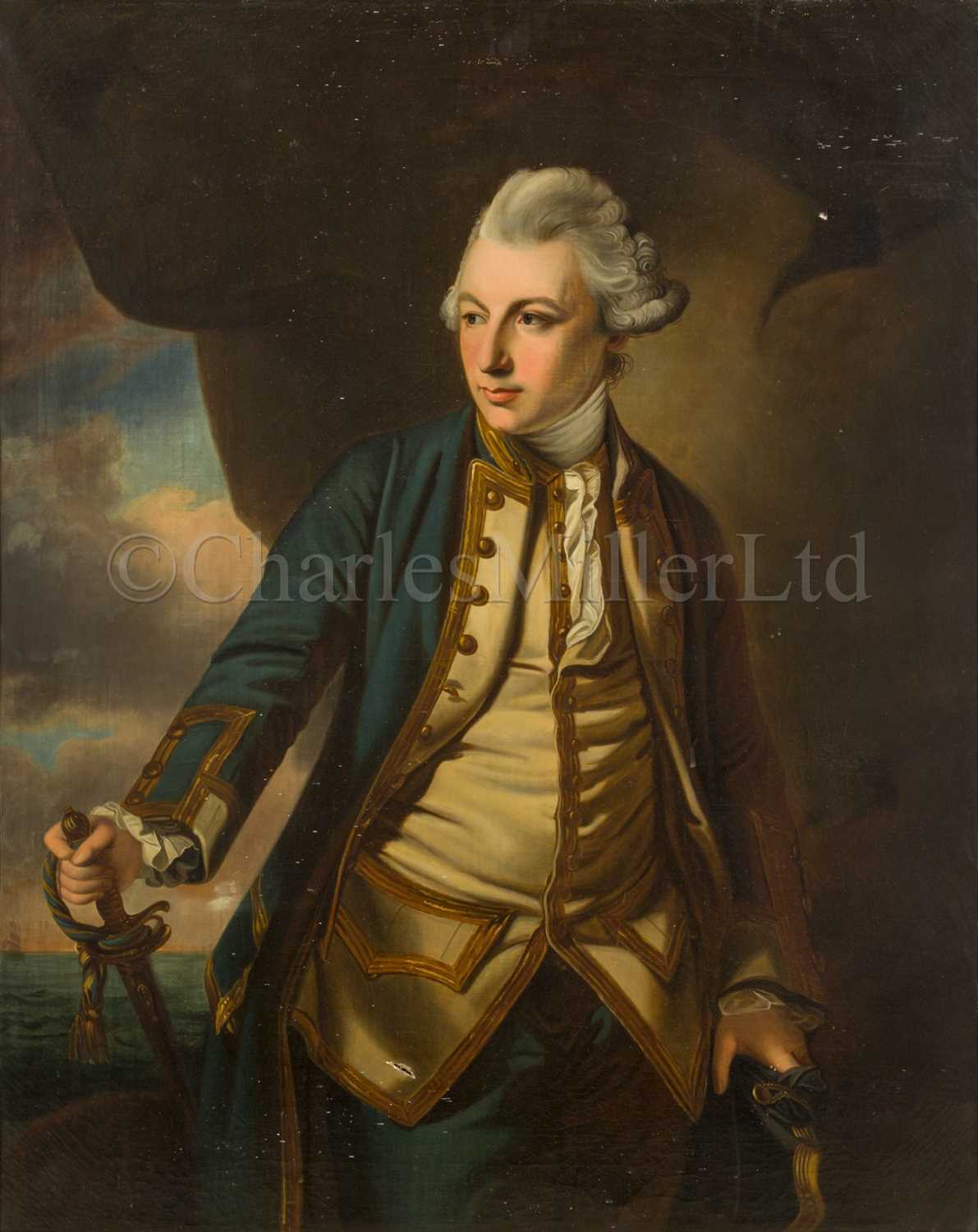 
Needs to be cleaned, 2 holes, paint chipping, would benefit from a re-line.

Portrait of John Jervis, Earl of St.Vincent, circa 1769

The source painting is located at the National Portrait Gallery, No. NPG2026

Admiral of the Fleet the Right Honourable Sir John Jervis, Earl of St. Vincent (1735-1823) was one of the most towering naval personalities of the 18th century and it was largely due to him that Nelson’s abilities were recognized and rewarded.

Born in Meaford, Staffordshire, his parents moved to Greenwich when his father was appointed Solicitor to the Admiralty and Treasurer of Greenwich Hospital whilst John was still a child. His father wanted him to go into the Law, but John determined on a career at sea and, after much parental opposition, entered the navy on 4th January 1749 as an able seaman in the 50-gun 4th rate H.M.S. Gloucester. After seeing action in the Mediterranean and North America in the Seven Years’ War (1756-63), his promotion to Captain came in 1760. When he participated in the battle of Ushant in July 1778, he was in command of the 80-gun Foudroyant and went on to distinguish himself on several occasions during the later stages of the American War of Independence, most notably on all three of the expeditions to relieve Gibraltar. After the War, he entered politics, became an M.P. and married, and in 1787 was promoted rear-admiral.

In the general promotion following the outbreak of war with Revolutionary France, he was made vice-admiral (1st February 1793) and his first wartime appointment was to command the fleet sent to secure Britain’s West Indian possessions. After initially capturing the French islands of Martinique and Guadeloupe in successful amphibious operations in cooperation with General Sir Charles Grey, Guadeloupe was quickly recaptured by the French and Jervis returned home with his reputation somewhat tarnished. Despite this temporary setback, he was nevertheless promoted to Admiral in June 1795 and was appointed to one of the most prestigious commands in the navy, namely the Mediterranean fleet. This was already a perilous time for Britain and, once Spain entered the war on the French side, the situation in the Mediterranean became graver still, to the extent that Jervis was soon forced to withdraw his fleet to the safety of the Tagus at Lisbon. From there, Jervis could monitor the Spanish fleet’s activities and it was from here that he emerged to confront the Spaniards off Cape St. Vincent in February 1797. In recognition of his great victory against such superior odds, he was elevated to the peerage as Earl of St. Vincent the following June.

In the wake of Nelson’s daring at the recent battle, St. Vincent’s subsequent support for his protégé is well-documented, but it did sometimes cause friction with several of St. Vincent’s fellow flag officers. Moreover, as he grew older, St. Vincent’s temper often got the better of him and reached a point in 1800 when the King had to forbid all the infighting at the Admiralty. St. Vincent’s health was also rather indifferent at this time, but he was still given command of the Channel fleet and kept an exemplary blockade of Brest from May to September 1800. With the formation of a new government early in 1801, St. Vincent accepted the role of First Lord of the Admiralty, a position he held until another change of government forced him to resign in May 1804. After William Pitt’s death in January 1806, St. Vincent agreed to return to sea to command the Channel fleet, but his failing health and the collapse of the new administration led to his official retirement in March 1807. Occasionally seen in the House of Lords thereafter, he was created G.C.B. in January 1815 and finally appointed Admiral of the Fleet in July 1821. He died in March 1823, aged eighty-eight, and as he was childless, the earldom became extinct although his viscountcy devolved to his only surviving nephew, Edward Jervis Ricketts.

You will not be able to bid live in the room. Absentee bids may be left via the website or using a bid form or you can bid via one of three online platforms. Absentee bids on our site must be left by 9am on the morning of the sale. Unfortunately, we cannot offer telephone bidding for this sale