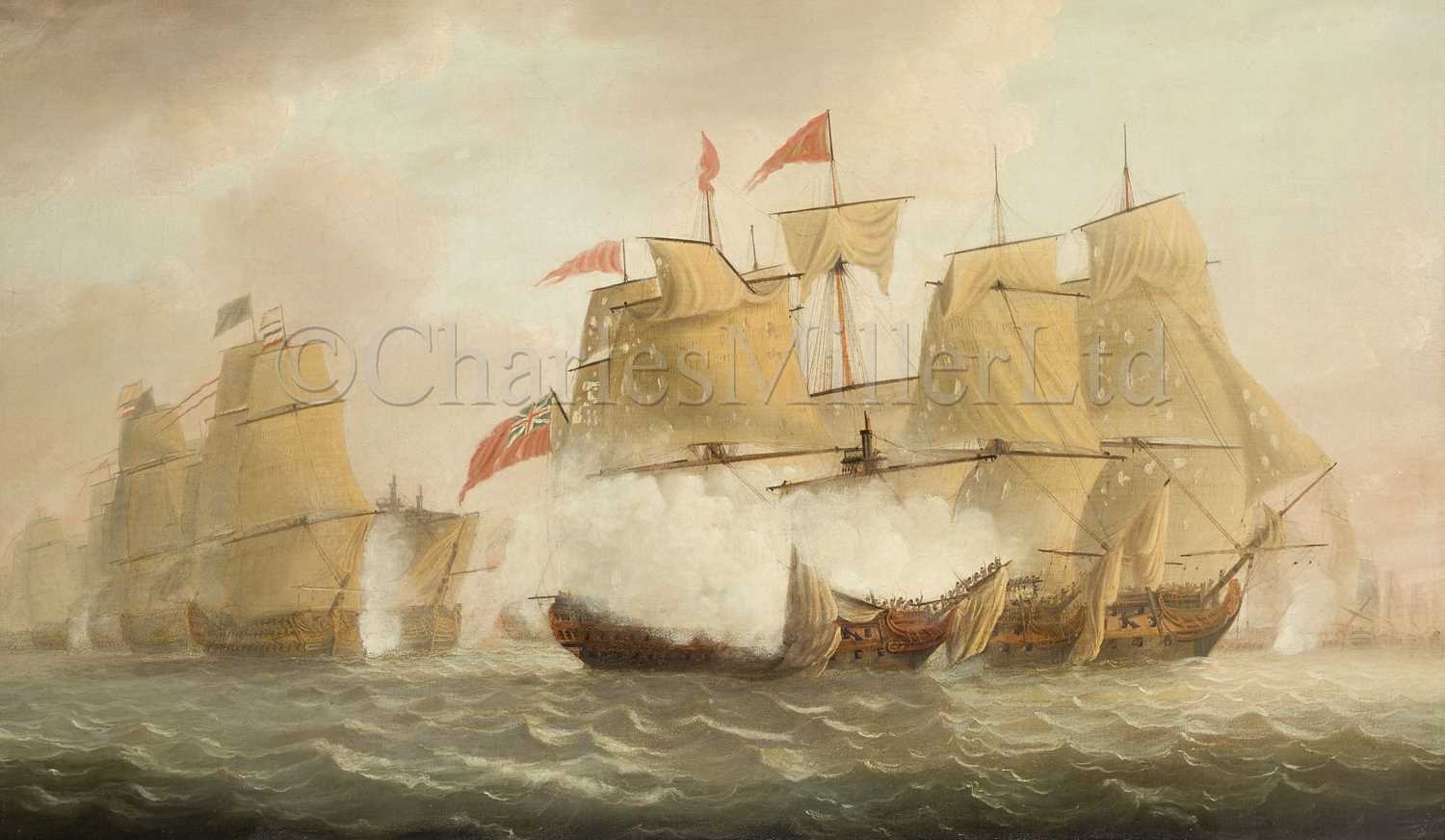 Before battle was joined on St. Valentine’s Day 1797, Admiral Sir John Jervis, C. in C. Mediterranean fleet, turned to those with him on the flagship’s quarterdeck and said “A victory is very essential to England at the moment”, the truth of which was all too obvious to everyone who heard it. Despite some early successes, most notably the battle of the Glorious First of June (1794), the war with Revolutionary France and her allies was not going well for Great Britain as 1796 drew to a close. A Franco-Spanish expedition to Ireland was being prepared and the large, albeit undermanned, Spanish fleet had been ordered to join its French counterpart already making for Brest. The Spaniards, under Admiral de Cordova, put to sea from Cartagena with twenty-seven ships-of-the-line in company with twelve frigates, only to find Jervis lying in wait for them off Cape St. Vincent. On 13th February Jervis was joined by Commodore Nelson’s squadron and, the following day, Jervis brought the enemy to action in what proved a landmark victory despite the numerical superiority of Cordova’s fleet.

On the morning of the battle, Cordova was hampered by hazy weather although Jervis knew exactly where they were thanks to Nelson’s accurate reporting of their position when he arrived the previous day. The Spanish were in three straggling lines whereas Jervis, sailing south, had put his ships into two tight columns. As the haze began to clear, Victory’s flag captain began to count the enemy ships as they emerged into view – 8, 20, 25, 27, at which Jervis interrupted him with a curt “Enough Sir, no more of that; the die is cast, and if there are 50 sail, I will go through them.” At about 11.30am. H.M.S. Culloden, Captain Thomas Troubridge, fired the opening shots of the day as he passed the windward division of the Spanish fleet and afterwards crashed through the enemy line. With the line breached, Jervis decided to concentrate his main attack on the enemy’s windward division of seventeen ships as Cordova had only placed nine to leeward. What was to prove a very complex action then began to play out during the afternoon, and the day ended with England having fully regained the initiative for the naval war at sea. Aided by Nelson’s tactical brilliance at a crucial moment in the battle, Jervis had decimated the Spanish fleet and forced what little remained of it to withdraw to Cadiz.

Jervis’s flagship Victory, built at Chatham in 1765, emerged from the battle with her reputation as one of the finest fighting platforms in the fleet assured; Nelson had little more to do to immortalise her. Salvador del Mundo put up a tremendous fight in this action and initially surrendered to H.M.S. Excellent, 74, thanks to Captain Collingwood’s expert gunnery and rapid broadsides. However, when Excellent turned away to tackle her next target, Salvador del Mundo briefly raised her colours again until Victory’s broadside (seen above) forced her final surrender and subsequent capture as a prize.

Nelson, recently promoted Commodore and given his own, albeit small, squadron, was flying his flag in the 74-gun H.M.S. Captain when he rendezvoused with Jervis in advance of the major engagement off Cape St. Vincent. On the morning of the battle, Jervis ordered his two columns of ships into a single line-of-battle, but the procedure proved painfully slow and, at a critical moment, Nelson realized that, unless he broke formation, the bulk of the Spanish fleet was liable to get away and run for Cadiz. Without a moment’s hesitation, he took H.M.S. Captain out of her station, closely followed by Collingwood in Excellent and Troubridge in Culloden, whereupon a furious action commenced at the head of the Spanish line. In the confusion, two enemy ships, the 80-gun San Nicolas and the 114-gun San Josef, collided with each other and Nelson seized his opportunity. Laying the already damaged Captain alongside the San Nicolas, he personally led the boarding party which, having captured her, crossed her decks and then took the even larger San Josef immediately afterwards. The men of the fleet dubbed the feat ‘Nelson’s patent bridge for boarding First Rates’, an accolade which delighted Nelson and cemented his growing bond with Jervis. It was, without doubt, a triumph of dash and daring, and although Nelson had technically broken his orders to achieve it, he emerged from the battle with his reputation made. Promotion to Rear-Admiral of the Blue and a Knighthood of the Bath followed swiftly, together with a recognition by the British public that they had discovered a new hero to win the war for them.

You will not be able to bid live in the room. Absentee bids may be left via the website or using a bid form or you can bid via one of three online platforms. Absentee bids on our site must be left by 9am on the morning of the sale. Unfortunately, we cannot offer telephone bidding for this sale