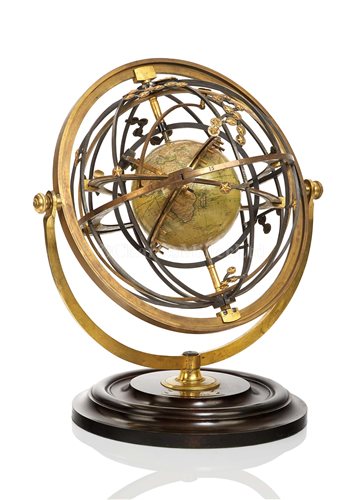 This instrument was designed to instruct and test naval cadets in their navigational proficiency. According to the above-mentioned article W[alter] Marsham Adams (1838-1899) was a former Fellow of New College, Oxford and seems to have been an author on various subjects, and an inventor having sent no less than three to the Vienna World's Fair Exhibition of 1873 of which this was awarded a medal: the Coelometer exhibits in a concrete form all the conceptions which are necessary for nautical astronomy and the relations which exist between them.. In prosecution of this object, it occurred to him to devise an instrument which should illustrate physically the conceptions of celestial latitude and longitude, as well as right ascension and declination. The method of representing the true horizon soon afterwards suggested itself, and subsequently the corrections for dip, parallax and refraction were added. By these means the whole theory of nautical astronomy becomes evident at a glance. The article later mentions that both the Training Ship Conway and the President of the Naval College at Greenwich planned to place orders for examples and that soon every training college, examining department and every ship and school would acquire one - to date this lot is the only example sighted in any public or private collection and it seems likely that the expense of such an instrument compared to traditional techniques thwarted the author's confident prediction.