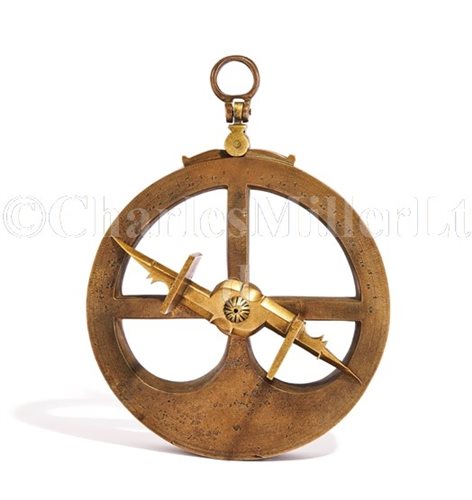 Condition report
Fine overall condition; Numbers and divisions are lightly punched but readable, typical minor casting flaws and minor wear commensurate with age; one pointer on the alidade is slightly off true.

A RARE PORTUGUESE MARINER'S ASTROLABE BY FRANCISCO DE GOES, 1595
cast from bronze in a wedge section with shaped base ballast signed GOIS 1595 and impressed with Manueline armillary sphere approval mark, divided over the top half 90º-0-90º and surmounted with a suspension loop on universal joint; the alidade with countersunk pierced pinnules in the sighting vanes, secured with decorative threaded axis pin and wing nut -- 7⅜in. (18.8cm.) diameter; 7lb 14oz (3.57kg)
Provenance: Purchased Funchal, Madeira, 1956

At the time the above survey was completed in 1987, sixty-five astrolabes were recorded. Since then, the list has been maintained informally and now numbers around 100 examples. As might be expected, many of these are wreck finds in poor-modest condition and most found as a result of improvements in diving technology. This example is a rare survivor and one which is in fine and original condition.

Most mariners' astrolabes are the products of either Spain or Portugal (a tiny proportion have been attributed to British, Dutch or French makers) where the industry became highly evolved with, according to Stimson, seven distinct patterns emerging between 1500 and 1700, which is believed to be their approximate period of use at sea - this example is Type I(a), a cast wheel with base ballast. Early in the sixteenth century, the Spanish authorities required all navigational instruments to be examined by the Pilot Major of the Casa e Contratación for accuracy, with successful instruments being stamped with an approval mark. The regulation was much ignored, to the extent that it was re-issued in 1545, however it is presumed that in the period when Portugal was a province of Spain (1580-1640) these regulations also applied, and the armillary sphere (a symbol adopted from King Henry the Navigator, 1394-1460, by Manuel I, 1469-1521, and still used on the Portuguese flag) was used as the approval mark.

Francisco de Goes flourished between 1587-1632 and worked from Lisbon, signing his instruments variously as 'Gois'; 'Goes' and 'Goys'. His son Agostinho de Raposo succeeded him, and also his grandson João de Raposo who took the family business into the third quarter of the seventeenth century.