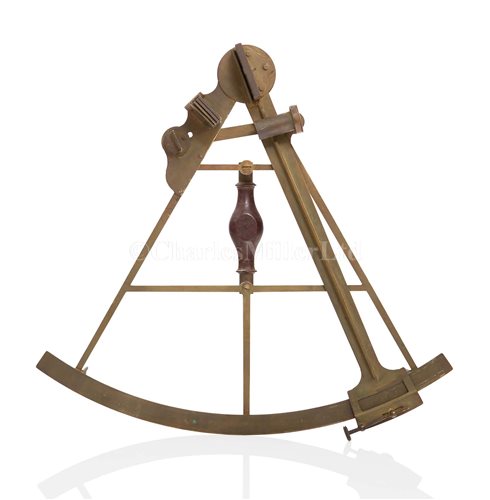 Provenance: Acquired unidentified 2005 from the estate of a retired R.N. officer in Devon.

George Vancouver (1757-1798) joined the Royal Navy as a 'young gentleman' in 1771 and served as a midshipman on Captain Cook's second and third Voyages of Discovery (1772-75; 1776-79) during which he is recorded as using a Ramsden sextant. Promoted Lieutenant upon his return in 1780, he served on several foreign tours thereafter and proved adept at hydrographic survey work. Latterly given his own command he was sent on his own 'voyage of discovery' in command of the Discovery (1791-95) where he produced some of the most significant and accurate surveys of the Pacific and North West coast of America. Like Cook, he was sent off with a selection of instruments to test including no less than twelve sextants by various makers including Ramsden, Adams, Dollond, Troughton and Gilbert and which he reported agreed exceedingly well together upon his return. In Canada, Vancouver Island and the city of Vancouver are named after him, as are Vancouver, Washington, in the United States; Mount Vancouver on the Yukon/Alaska border; and New Zealand's sixth highest mountain. His final promotion was to Captain in August 1794 however, despite his impressive achievements, his work was never fully recognised in his own time and he died unmarried at Petersham, Surrey, on the 18th May 1798, his grave marked by a plain stone.

Ramsden's Sextant for Vancouver
It seems Vancouver was not entirely satisfied with this instrument's error and wrote a stiff enough letter of complaint that Ramsden - who brooked very little criticism - responded with a robust defence of it to the Board of Longitude, claiming the error was no more than a ¼ of a minute of arc having re-tested it on Vancouver's return. As a midshipman on Cook's Second and Third voyages, he would certainly have taken many of the measurements recorded and possibly used them in conjunction with the trial 'sea clocks' sent by John Harrison to determine their location - an error of just 1 minute of arc equates to two nautical miles which would have to be compensated for. It would have been produced on Ramsden's first circular dividing engine of 1768 which, whilst representing a great leap forward in scale division, he himself found wanting mainly for ease of usage, and he had completed new updated engine in 1774, selling the first engine to a French collector. The instruments he would have sent for testing with Vancouver would have had smaller radii and therefore frames as this second engine could divide accurately and to a finer degree. The instrument offered here conforms closely to the example held by the National Maritime Museum, Greenwich, believed to have been taken by Cook on his Third Voyage, item number NAV1236.