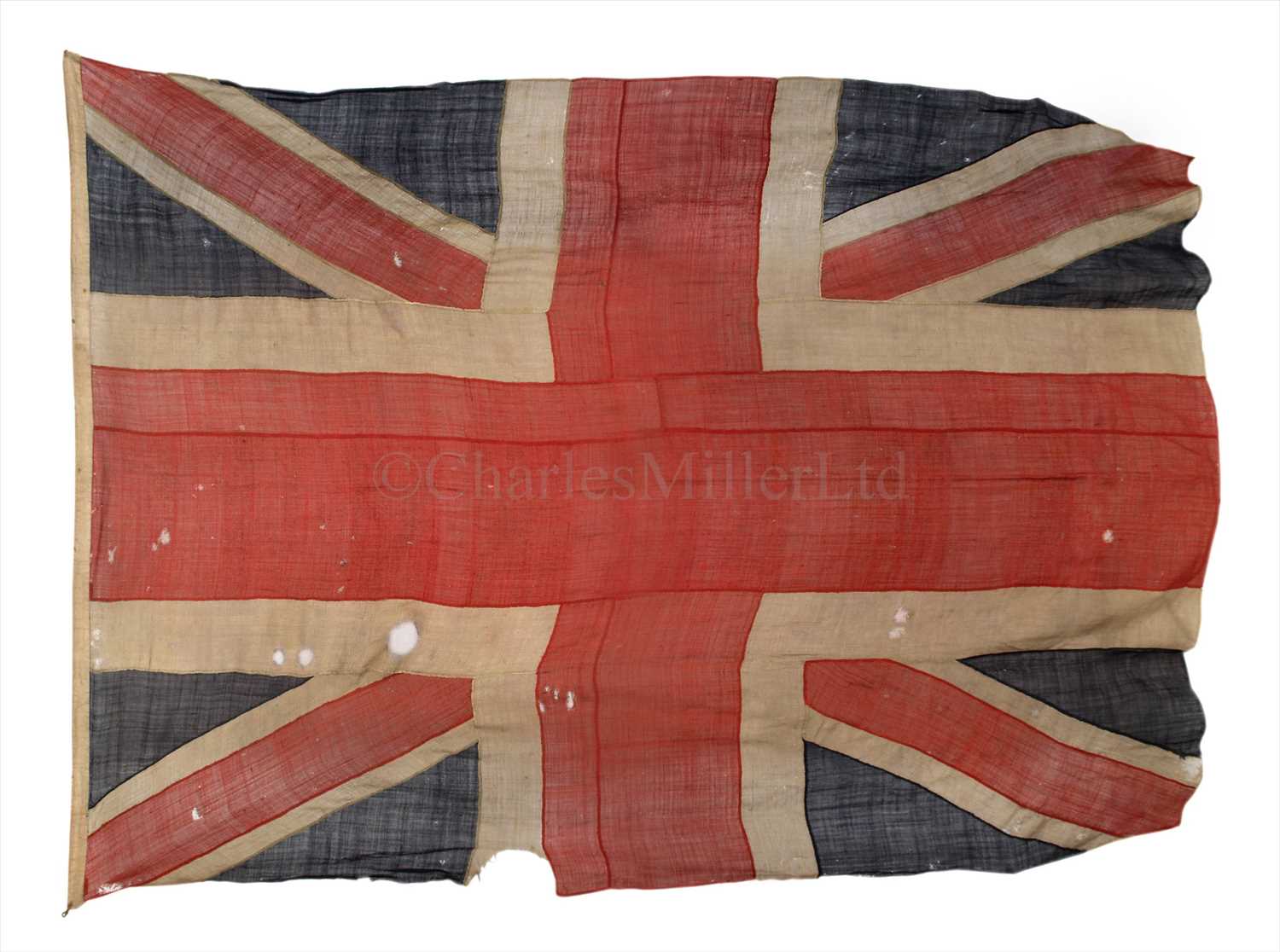 
Share this!
**A VERY RARE AND FINELY PRESERVED UNION FLAG FLOWN FROM THE JACKSTAFF OF H.M.S. SPARTIATE AT THE BATTLE OF TRAFALGAR, 21ST OCTOBER, 1805
comprising thirty-one hand-stitched bunting panels with canvas sleeve and lanyard - 88 x 140in. (223.5 x 355.5cm.)
Provenance: James Clephan and thence by descent.
Capt. James Clephan R.N. (1768-1851) was born in Fife and spent his early years as an apprentice weaver. As the industrial revolution took pace, this became an increasingly precarious occupation and several thousand Scottish domestic loom weavers were rapidly overwhelmed by new factories. The loss of the American market in 1776 only exacerbated the situation and Clephan started to dabble as a merchant seaman to make ends meet.
It was in this capacity that he was impressed into the Royal Navy (who naturally preferred seasoned men where possible) on the 23rd July, 1794 at the age of 26. Beginning as an AB (able bodied) 2nd Class Mate aboard the Sibyl (26) he then made 2nd Class Gunners Mate on the Doris (36) and Masters Mate, 10th October 1796. Over the next four years he rose to Midshipman on 7th January 1801, being made a Lieutenant on 31st July 1801 for distinguishing himself in the successful cutting out of the Chevrette at Brest. Under a hail of grape and musket shot, the boats of Doris, Beaulieu and Uranie boarded her. Despite being wounded and knocked overboard, Clephan was still the first man to reach the enemy's deck. On his promotion Admiral Cornwallis said ..you well deserve your promotion; few officers have earned it so hardly. Assigned to the 90-gun Namur he served as her 2nd Lientenant until the Peace of Amiens in April 1802. Taking the opportunity to marry during this brief interval, in March 1803 Clephan was reassigned the lieutenancy aboard the Spartiate under Captain Francis Laforey, where he remained until December 1809. At the battle of Trafalgar Clephan's courage was recognised once again and he was promoted to First Lieutenant immediately after the battle. The crew, honouring one of "their own", paid him the highest compliment they could and presented him with this Union Flag, which quite possibly had been stitched by them on board. In 1811 he followed Laforey, who seems to have been his sponsor and perhaps mentor, to the Dragon (74) and in April was promoted to Commander to the sloop Charybdis in which he captured two American vessels, the brig William Rathbone and the privateer Blockade in 1813. In 1814-15 he participated in the expedition against New Orleans and, on its failure, conveyed the dispatches. In August 1815, with the Peace, he was paid off at Deptford and placed on half pay. Retiring in 1840 with the rank of Captain, he lived in Edinburgh where he died on 28th January 1851 at the age of 83.
During the twenty-two years the Napoleonic Wars lasted, it is estimated that around 600,000 seaman served the Royal Navy, of which considerable numbers were impressed. The chances of a member of the lower decks making Officer were remote, however around 200 did so, and of those, about sixteen became captains of their own ship. Clephans uniform can be seen on display at the Edinburgh Museum of War.

The Spartiate was built by the French at Toulon in 1794 and named La Spartiate. She was a 74-gun Third Rate ship of the line measuring 150'4" with a 49'4½"beam, drew 21'7" and displaced 1,949 tons burthen, carrying a crew of 640 men. Captured by Nelson at the Battle of the Nile, it transpired the Spartiate had been the ship responsible for the wound Nelson received to his forehead during the battle, she also had items found within her ordinance including fireballs and explosive shells which had not yet been adopted by the Royal Navy. In 1803 with the Peace of Amiens clearly crumbling fast, Spartiate was made ready for war and in 1804 was handed over to Captain Sir Francis Laforey who was to remain with her until 1809.
At Trafalgar, the Spartiate was eleventh and last in Nelson's weather column following the Minotaur into action. Slightly under strength, the crew consisted on 540 seamen and 80 Royal Marines. Shortly after 3.00pm they engaged the Formidable at the head of Dumanoir's southern van, giving and receiving fire from five ships as they passed. They then turned their attention to the Spanish: Bringing Spartiate abrest of Neptuno (80) which was attempting to escape Minotaur, Laforey ordered his gunners to open fire and then Wore the ship to engage on the other tack.. After pummelling Neptuno for an hour, the Spaniard finally struck and drifted off out of control into the Téméraire. Laforey logged that at 5.20 the firing ceased observed 12 of the Enemy's Ships had struck.. 5.54 the French ship that caught fire in the SE blew up.. By the end of the action Spartiate had sustained casualties of three killed (the boatswain and two midshipmen) and twenty wounded. The damages sustained were logged by Laforey: The Foremast and Bowsprit badly wounded in two places. 1 shot well thro' the heel of Maintopmast, which splintered it much Fore & Main Shrouds shot away and several of the Top mast Do. Backstays running rigging all cut very much and several shots in our hull & several small grape shot in the Fore and Main masts Empd Repg the damages & getting the Ship ready to renew Action. After the battle she took the badly mauled Tonnant in tow to weather approaching gales which blew for three days after which the fleet reformed. They finally made Gibraltar on 10th November where they were able to take stores and effect further repairs before returning to England where they arrived at Plymouth on 14th December. Spartiate continued to have a very active career and was in and out of commission until 1842. In that year she was fitted as a "temporary" sheer hulk, a role she fulfilled for fifteen years before finally docked for breaking up on 27th March 1857, the work completed 30th May that year.