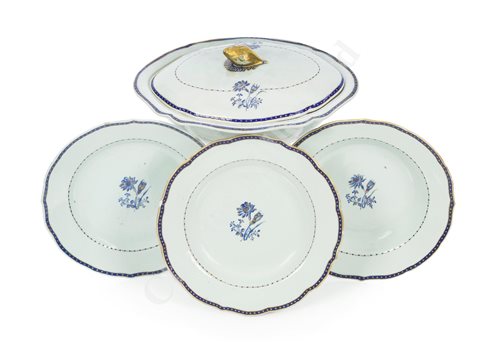 decorated with deep blue and gilt work with gilt flower bud knop to shaped lid – 11½in. (29cm.) wide; together with two dishes and a plate of similar design

Built for the Swedish East India Co. in 1738 and named for its home port, the 850 ton Götheborg had made three successful trips to China. In 1745 she returned laden with a full cargo when, just 800 meters from her berth in fair and clear weather and despite the presence of a highly experienced pilot, she struck a notorious rock which lifted the bow some 4½ft from the water, and stuck taking on water fast. Whilst much of her cargo was saved, her wreck remained above the waterline for many years and, when it finally sank, it was forgotten about. In 1984 a local diving club discovered it again in about 4-5 meters of water and brought up a number of artefacts - much of it porcelain shards, but also intact pieces and much else besides. A total of 5,750 artefacts were ultimately raised, and generated enough interest to cause a copy of the ship to be built and sailed.