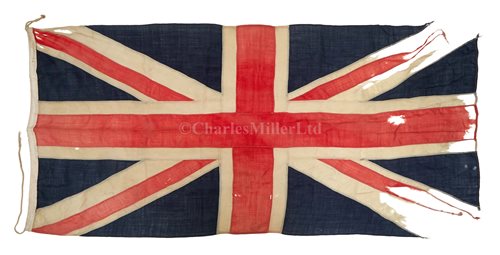 
Share this!
A UNION FLAG LANDED WITH THE 3RD CANADIAN DIVISION AT JUNO BEACH, D-DAY 6TH JUNE 1944, CARRIED BY 'P' COMMANDO SUB-LT. ALAN DALTON R.N.
stitched bunting, the canvas sleeve stencilled 3YD JACR [?], with rope lanyard (tattered edge and wear to top by sleeve) -- 68½ x 36in. (174 x 91.5cm.); together with a brass plate inscribed S/LT. Dalton led the commando team that the cleared the beaches prior to the landings; and a later plate inscribed The first Union Jack to be flown on the 'D' Day beaches. Hoisted by S/LT. Now Sir Allan [sic] Dalton; historical data.

Sir Alan Dalton C.B.E. D.L. (1923-2006) joined the Royal Navy in April 1943 and, as soon as basic training was completed, volunteered for the R.N. Commandos (not to be confused with Marine Commandos) created specifically for the invasion of Europe, and was posted to their depot, H.M.S. Armadillo at Loch Long, 45 miles north-west of Glasgow. From September 1943 he was posted to 'P' Commando (originally known as R.N. Beach Commando 'Peter') and trained with Force 'J' for operation Neptune (the naval element of the Normandy landings). In March 1944 he was promoted Sub-Lt. and commenced training with the Canadian 3rd Division which was moved to the South Coast in stages. On D-Day the unit was landed just before 07.30 (a delay of half and hour because of strong winds and tide) and Dalton guided this division (numbering some 14,000 men in total) across the beachhead carrying this flag. 'P' Commando suffered heavy casualties in the intense fire fight and were reinforced by 'W' (Canadian) Commando on D-Day+3. The unit then remained at the beach command post for 6 weeks to supervise the follow up troops. In July 1944 'P' Commando was returned to the UK and Dalton brought this flag back as a souvenir - the unit was disbanded in October 1944 and Dalton released from Naval Service in July 1945 - H.M.S. Armadillo was also paid off that September. In his post-War career Dalton became the highly successful chairman of English China Clay based at St. Austell in Cornwall, was made C.B.E. in 1969 and knighted in 1977.