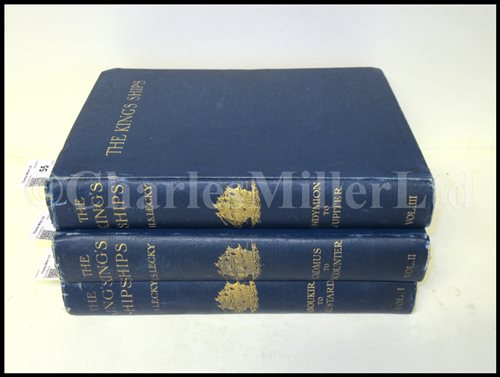 HALTON S. LECKY, THE KING'S SHIPS, A PRESENTATION COPY WITH A FASCINATING “SINKING OF THE BISMARCK” CONNECTION

three volumes (of the projected six), London, 1913, lavishly illustrated throughout and detailing all H.M.’s ships, past and present, listed alphabetically Aboukir-Jupiter, original publisher's blue cloth, a monumental work containing much obscure information, particularly on the careers of many less famous vessels, the work sadly interrupted by the Great War and never completed thereafter

Each volume with printed bookplate reading “Presented by the Lords Commissioners of the Admiralty to Sub-Lieut. A.J.L. Phillips, R.N. for Meritorious Work, 1914”

The recipient of this Admiralty Prize, Sub-Lieut. (later Rear-Admiral) A.J.L. Phillips was born in 1893 and joined the Navy in 1911. Successive promotions followed until he was made captain in 1934. In this capacity, he was in command of the cruiser Norfolk, assigned with her consort Suffolk, to shadow the Bismarck and Prince Eugen through the Denmark Strait as they attempted their famous ‘break-out’ into the North Atlantic in May 1941. Once Bismarck was sighted, the Admiralty immediately dispatched H.M. Ships Hood and Prince of Wales to intercept her. The four capital ships came to action just before 6am on 24th May and opened fire at 25,000 yards. After a mere ten minutes, a plunging shell penetrated Hood’s deck and, to the amazement of all who witnessed it, she blew up and sank instantaneously with the loss of 1,338 officers and men. Captain Phillips, a key witness, wrote afterwards that Hood had gone down “with a glow that pulsated like the appearance of a tropical sun”, and he subsequently received the DSO for his part in the operation. Retiring in 1944, Phillips received his final promotion to Rear-Admiral (ret’d) in 1947.