A REMARKABLE PRIVATE ALBUM OF PHOTOGRAPHS... 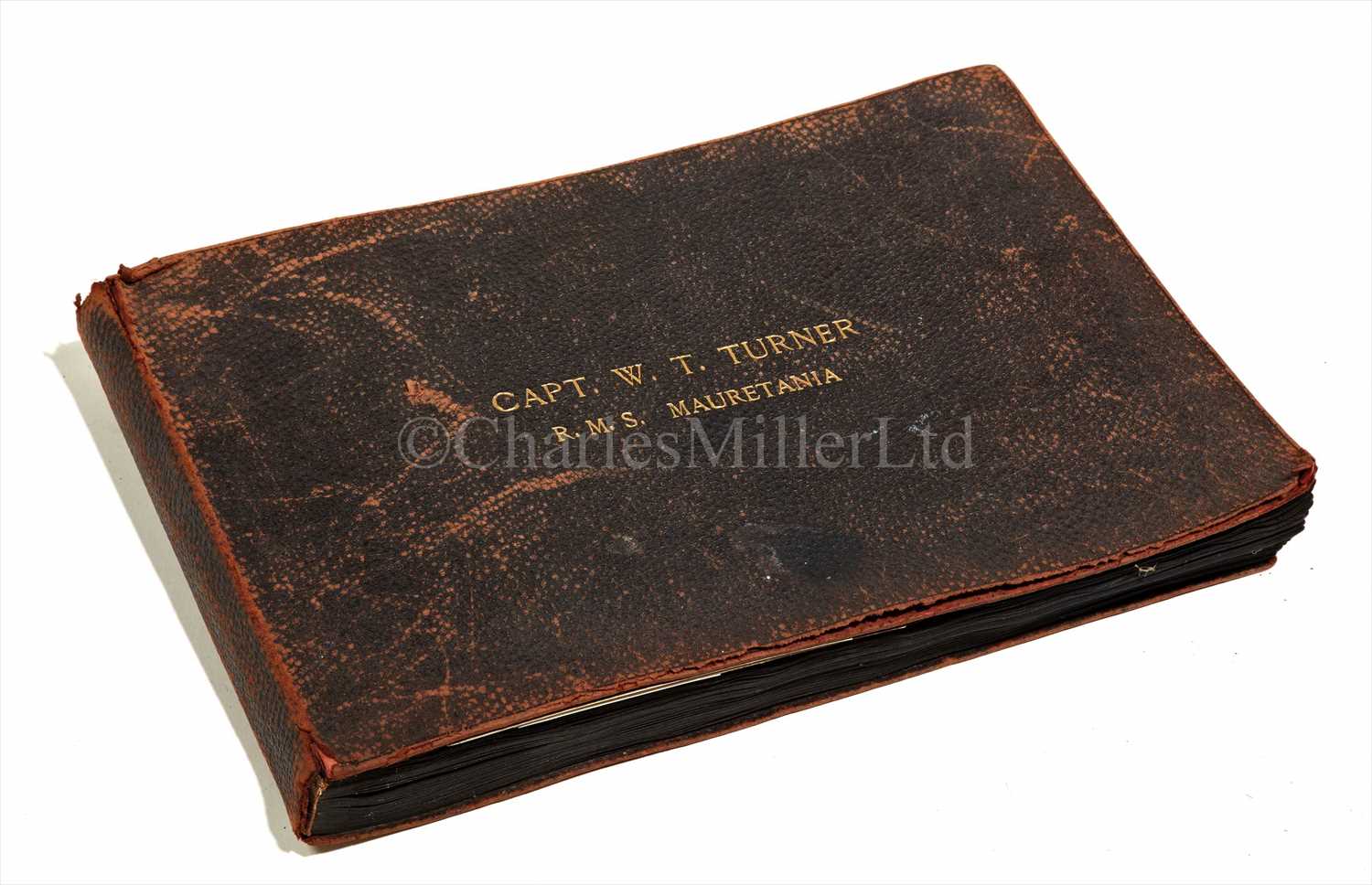 A REMARKABLE PRIVATE ALBUM OF PHOTOGRAPHS...


Share this!
A REMARKABLE PRIVATE ALBUM OF PHOTOGRAPHS TAKEN BY CAPTAIN W.T. TURNER, INCLUDING VIEWS TAKEN ABOARD THE CUNARDERS MAURETANIA AND LUSITANIA
apparently dating between 1904 and 1910 and comprising approximately four-hundred private views taken by and of Turner, most pasted along top edge and annotated with characters and locations in pencil to reverse, around half taken aboard various commands, mostly Mauretania, but with several hitherto unseen views from Lusitania. Also interesting scenes taken opportunistically, including several views of the wreck of the U.S.S. Maine; several dockyard views of luggage being loaded; the boat train dining car; Turner posing with various passengers or relations, often wearing his hat or tunic, or of Turner taking a sight with his sextant. Also a contemporary promotional brochure for Mauretania and some views of Lusitania taken from Mauretania, bound between soft leather covers embossed CAPT. W.T. TURNER / R.M.S. MAURETANIA -- 10 x 14½in. (25.5 x 37cm.)

Not intended to be of interest to any but himself and family, this album captures a rare view of the private side of a liner captain from the 'Golden Age'. Frequently ragging around, Turner is often shot with a pretty girl, who is wearing his hat, or lying in a hammock. He was clearly a happy man and his sense of humour is much in evidence. One of the more striking shots is a view of Turner climbing the rigging of the main mast of Lusitania and holding his camera, the next view is the shot of the funnels and deck taken from that location. These rare views are unknown and unpublished, providing a wealth of interesting material about Cunard's most tragic Captain. Made the scapegoat for the tragedy that overwhelmed the liner on 7th May 1915 when the German submarine U-20 torpedoed Lusitania - despite precautions, and a universal belief that the great liner's speed and size would save her, she sank in under 20 minutes with the loss of 1,200. Although Turner survived, his hitherto successful career was over and the authorities, perhaps hiding their own shortcomings in not providing a naval escort, roundly blamed him.