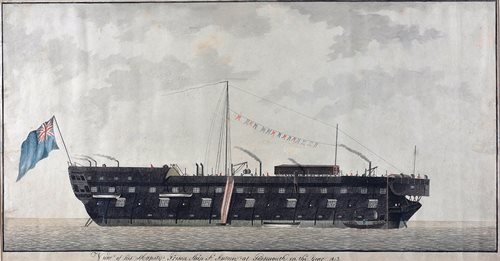 NAPOLEONIC PRISONER-OF-WAR SCHOOL (FRENCH, EARLY 19TH-CENTURY
A view of his Majesty's Prison Ship St. Antony at Portsmouth in the Year 1813
Watercolour with title
Signed and inscribed 'By Francis St. John of Dunkirk on board His Majesty's Ship Canada at Chatham' (lower right)
13¼ x 24¾in. (33.5 x 63cm.) Framed and glazed

A '74 built at Cartagena, Spain, in 1785 and launched as the San Antonio, she was ceded to France as Le Sainte Antoine in 1800 and captured by Saumarez off Gibraltar in July 1801. Laid up at Portsmouth from October that year, as the Napoleonic Wars ground on, a seemingly never-ending flow of prisoners swelled the established shore-based camps to such an extent that the Government was forced to introduce more prison ships. Between 1807-1814 the St. Antony (as she was now unofficially styled) was hulked and housed approximately five hundred prisoners. After the war she was converted to a powder magazine until finally sold for breaking in 1827.

A previous painting by this prisoner-artist using his French name of 'François St Jean de Dunkerque' was sold in these rooms as lot 67 in sale CM011, 1st May 2013. Presumably a talented officer, it's not clear how St Jean/St. John had authority to make such detailed studies of these hulks and their dispositions as they are of high enough quality to be considered intelligence. If he had personal sight of the St. Antony, one can only speculate that he was sent there on purpose to do so.