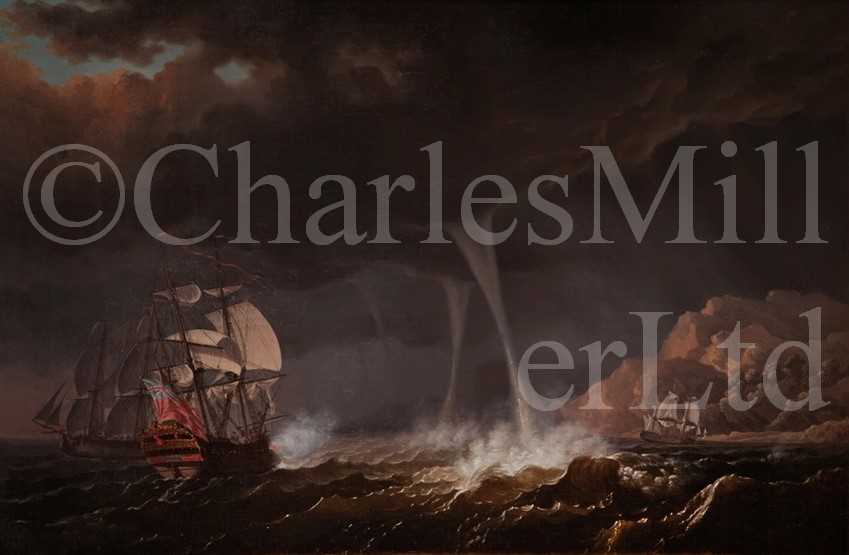 OLIVIER LE MAY (1734-1797)
An English Squadron of the Red encountering multiple water spouts, probably off Gibraltar, whilst in pursuit of a Spanish armed merchantman
Signed 'O Le May' (lower left on stern of principal two-decker)
Oil on canvas
19½ x 29in. (49.5 x 73.7cm.)

This intriguing scene undoubtedly records an incident which has yet to be properly identified. Frustratingly, the artist has signed the picture where the most obvious clue - the vessel's name - might have been put. However, the vessel apparently aground under the headland, is flying a white flag with a red saltire - although Ireland was not fully part of the Union of Great Britain at that time, neither did she maintain a significant navy, merchant or otherwise; The most likely candidate would seem to be the "Ragged Cross" flag. This 'Cross of Burgundy' as it is also known, was in use as the Spanish naval ensign between 1506-1701, and as a Biscayan merchant ensign between 1511 and 1830. If this is indeed a Spanish armed merchantman run ashore by British vessels intent on booty, there are several Wars which would have provided them with a suitable excuse, however the looming headland in the middle distance looks distinctly like the famous Rock of Gibraltar which has served as a notorious flash-point between Great Britain and Spain ever since it was handed over in perpetuity by the Treaty of Utrecht in 1713.