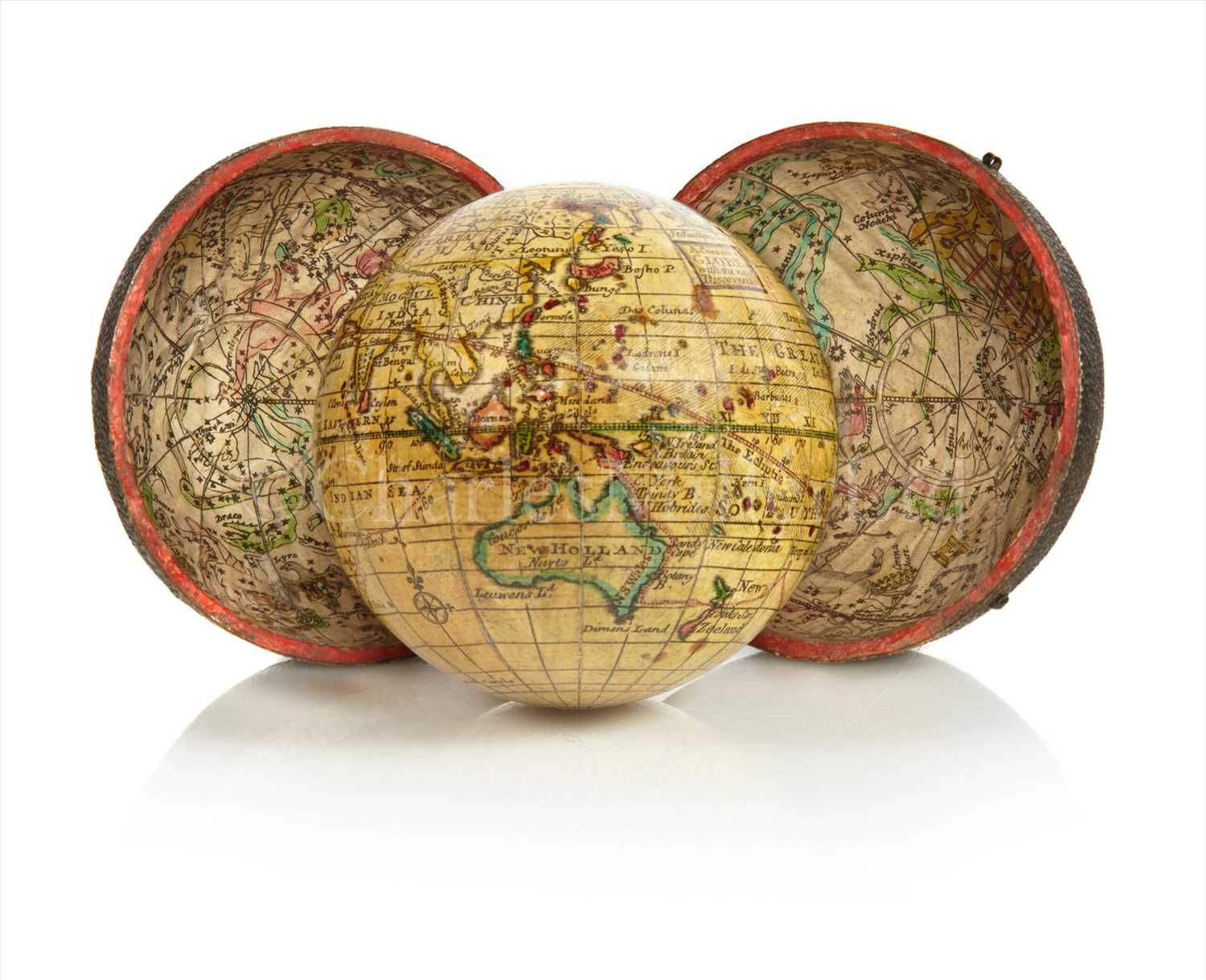 [GEORGE ADAMS, LONDON]: 'A CORRECT GLOBE WITH NEW DISCOVERIES' [circa 1785]
a 2¾-inch diameter terrestrial pocket globe made up of twelve hand-coloured engraved gores and two polar calottes, the equatorial graduated in degrees and hours, the meridian of Greenwich ungraduated, the meridian at 15°W graduated in degrees, the ecliptic graduated in days of the houses of the Zodiac with sigils, the oceans with trade wind arrows, a wind rose with fleur-de-lys in the southern Indian Ocean, and Cook's Track 1760, the continents delicately shaded and coloured in outline in red, green and yellow band showing towns, river and mountains and forests in pictorial relief, Australia labelled as NEW HOLLAND and with Tasmania as a promontory, North America with no northern coastline, western Canada labelled Parts Unknown. Contained in the original spherical wooden fishskin-covered case, the interior laid with two sets of twelve hand-coloured engraved unvarnished celestial half-gores and two polar calottes, a cartouche for A Correct Globe with ye New Constellations of Dr Halley & Co., the equatorial and equinoctial colure graduated in degrees, the ecliptic graduated in days of the houses of the Zodiac, the stars to six orders of magnitude and the constellations depicted by mythical beasts and figures, the rims of the case painted red, with two brass hook eyes

Van der Krogt (stating that: "The smallest globe [by Adams, i.e. 2¾-inch] is unsigned") illustrates and describes a similar globe as Ada 1 ("Cook's first voyage ... is indicated with the legend Cook's Track 1760") mounted on a tellurian signed by George Adams and describes another three similar unsigned globes (Ada 2-4) mounted in an armillary sphere, tellurian (both signed by George Adams) and a planetarium signed by Nairne & Blunt. A similar globe is described as item 5.16 in The World In Your Hands: "This anonymous pocket globe has often been ascribed to the work of George Adams Jnr since an armillary sphere signed by Adams uses this pocket globe. However, recent research has shown that the origin of these gores is Hermann Moll's pocket globe of 1710". The label of 5.16 is illustrated by Schmidt (p. 3) and is the same as that on the present example.
Item 5.13/5.14 would also seem to be similar: "the terrestrial showing the track of Capt. Cook's first voyages (1768-71 but incorrectly dated 1760) and the discoveries of his second and third voyages, i.e. New Caledonia, indicating that the globe was made in or after 1784 when Cook published his account of the third voyage".
Given this rather confusing plethora of possible sources, one hypothesis could be that John Senex (who is described in The World In Your Hands as "very much a rival to Hermann Moll") bought up Moll's plates after his death in 1732. It is known that Senex's widow sold off his plates in 1755 and "George Adams acquired the plates for the pocket globes". Van der Krogt describes a tellurian using a Senex globe made by George Adams (Sen 1), so it could be that Adams used a re-engraved version of Moll's globe, from Senex's stock, for the items Ada 1-4.