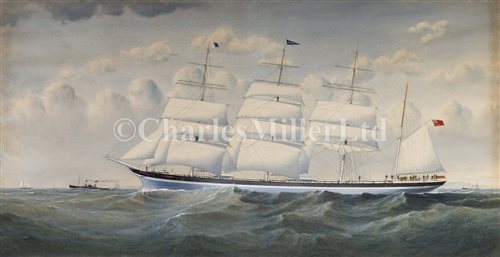 Provenance: with The Boydell Galleries, Liverpool.

Built for the famous house of Brocklebank by Harland & Wolff at Belfast in 1887, Sindia was a huge four-masted barque which, at the time of her completion, was the largest sailing vessel in the world. Registered at 3,067 tons gross (5,000 deadweight) and measuring 329 feet in length with a 45 foot beam, she was designed with two decks and, consequently, had vast cargo capacity. Intended for the Calcutta trade at a time when most other owners had already gone over to steam, Sindia left Liverpool on her maiden voyage to Calcutta on 6th February 1888 and immediately proved faster than her carrying capacity might have suggested. Although no record-breaker, she had a fine turn of speed and possessed all the handsome elegance of many earlier Belfast ships which turned heads wherever she went. Finally ousted from the Calcutta trade by steam, she became a bulk grain carrier for a few years until 1900 when, along with all the remaining Brocklebank sailing vessels, she was sold out of their fleet.

Purchased by the Anglo-American Oil Company, she was converted to carry 'case oil' (oil in drums) on outward passages and chrome ore back into the U.S.A. Sadly, her new career proved short-lived when, on 15th December 1901, she was driven ashore and wrecked at Ocean City, 95 miles south of New York on the coast of New Jersey. Inbound for New York from Kobe, she was caught in a severe winter blizzard and had been trying to run for shelter in Delaware Bay when she stranded. Various attempts to refloat her were unsuccessful and although the greater part of her cargo was salved, the ship herself was declared a total loss and her decaying hull became a local landmark for many years.