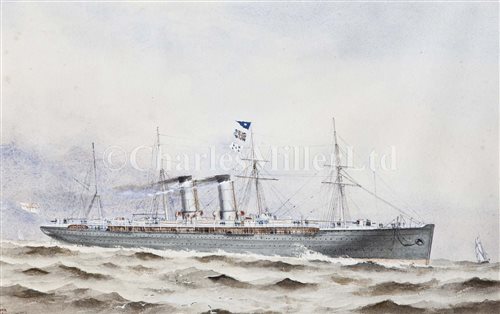 The S.S. Oregon was built by John Roach and Son in Chester, PA and owned by the Oregon Steamship Company. On 7th October 1883 the Oregon embarked on her maiden voyage from England to New Jersey, a passage which took a record setting 6 days, 10 hours, and 40 minutes. For part of 1885 she was briefly armed during the "Russian Scare" and it is in this configuration she is depicted here. On 6th March 1886 the Oregon departed Liverpool, England for New York. The voyage was cut short when only eight days later and five miles from her destination she was struck on the port side by a three-masted schooner. The schooner's identity remains unknown however evidence exists to suggest that it was the Charles H. Morse. All aboard the schooner perished and the remains of the ship and its passengers have never been found. It was determined after surveillance that the Oregon was too damaged for salvage.