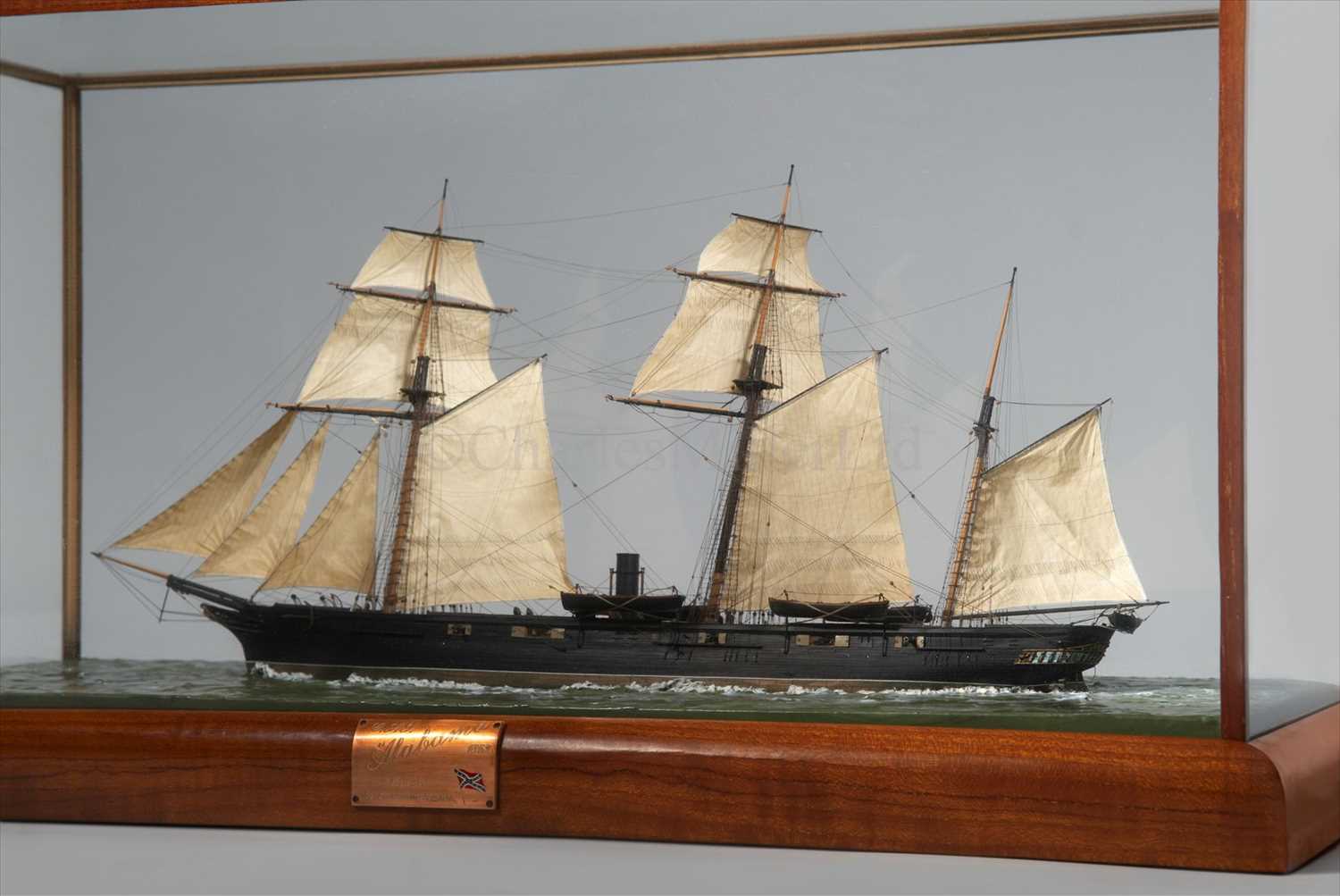 AN EXCEPTIONAL 16':1" SCALE WOOD AND METAL WATERLINE MODEL OF THE CONFEDERATE WARSHIP ALABAMA (1862), MODELLED BY DONALD McNARRY
the planked hull sheathed below the waterline, planked deck crowded with detailed armament, fixtures and fittings including inlaid gun tracks, open signal flag lockers, gratings, binnacles, double helm, five open ship's boats swung out in davits, shot racks with shot, belaying rails and pins in use, raked masts with standing and running rigging, yards with foot ropes, realistic lined paper sails, is set on an undulating green sea with wake, sealed within a glazed wooden case with brass plates. Overall measurements -- 13 x 23½ x 9¼in. (33 x 60 x 23.5cm.)
Secretly built in Merseyside and launched on 31st July, 1862 at a cost of £51,000 Alabama was laid down by Laird Bros. Ltd. of Birkenhead and classed as an auxiliary barque, being fitted with a direct-acting 600 horsepower engine which produced 13 knots. With an overall length of 220 feet, a breadth of 32 feet and a displacement of 1050 tons, she carried a complement of 148 men. Lightly armed with six 32-pound broadside carriage guns and one vast 100-pound Blakely rifled gun, she was built for speed. Originally named Enrica to evade American spies and the British Foreign Office, her true purpose was nearly discovered at the end of July 1862. With the British government about to seize her, she left Liverpool on what was supposed to be her final trial run, instead, under the command of Captain Raphael Semmes, she headed for the open sea and assumed her true name. So began her two year reign of terror, capturing or sinking 67 Union vessels valued at nearly $6 million between 1862-1864. During these two years the Alabama never put into port for repairs or provisions, instead taking fuel, food and ammunition from the merchant ships which she captured and destroyed. Leaking and fouled after this time, she put into Cherbourg on 16th June, 1864 for repairs, but was cornered by the U.S. cruiser Kearsarge, a chain-clad Federal sloop of war under the command of Captain Winslow. The Alabama was forced into the English Channel and once free of the three-mile limit, a fierce and circling battle commenced lasting three hours, watched by spectators on the shore. The Kearsarge's superior arms eventually put the Alabama out of action and she struck her colours, but sank before she could be captured.