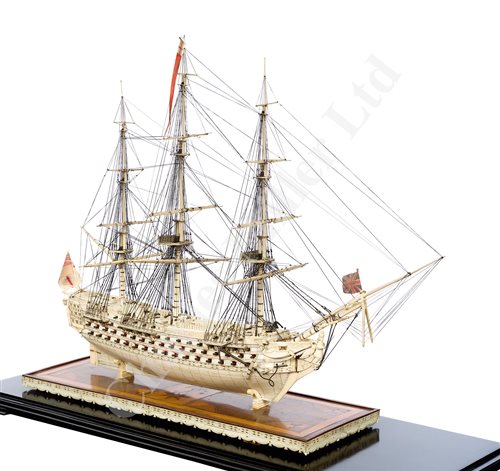 A magnificent and highly successful ship throughout her long life, H.M.S. Caledonia was laid down in Plymouth Dockyard in January 1805 and launched on 25th June 1808. Built under the direction of Mr. Joseph Tucker to a design by Sir William Rule, one of the Surveyors of the Navy, she was originally intended to carry 100 guns but was modified whilst on the stocks to mount 120 guns and, as such, was only the second vessel of the fleet to be so impressively armed. An enormous ship of 2,616 tons burthen, her gun deck measured 205 feet in length with a 53½ foot beam, and she was the largest warship ever constructed for the navy at the time of her completion.

First commissioned as flagship to Admiral Lord Gambia, she was soon in action when, on 12th April 1809, she played a pivotal rôle in the destruction of the French fleet lying in the Basque Roads, off St. Nazaire. The Royal Navy's long blockade of the French ports was a tedious business and Caledonia was still stationed off the Basque Roads on 24th February 1811 when she was struck by lightning and had to return to Portsmouth for a new foremast. On 1st June 1811, she became flagship to Admiral Sir Edward Pellew (later Lord Exmouth) after which she spent three years in the Mediterranean for the duration of his tenure there as Commander-in-Chief. During this period she was present at the surrender of the fortress at Genoa in April 1814 prior to returning home that August, and was thereafter laid up due to the final ending of hostilities with France.

Not commissioned again until 1830, she was found to be in such excellent condition that there followed several more periods wearing the flags of various Commanders-in-Chief, including two further terms in the Mediterranean, until she was finally withdrawn from sea service in the early 1850s. In 1856 she was fitted out to replace the old Dreadnought as the Seamen's Hospital Ship at Greenwich and, having taken the name of Dreadnought in 1857, occupied that position until the hospital facilities were moved ashore in 1873. No longer worth refitting or even hulking, Caledonia was towed to Chatham where she was broken up in the spring of 1875.