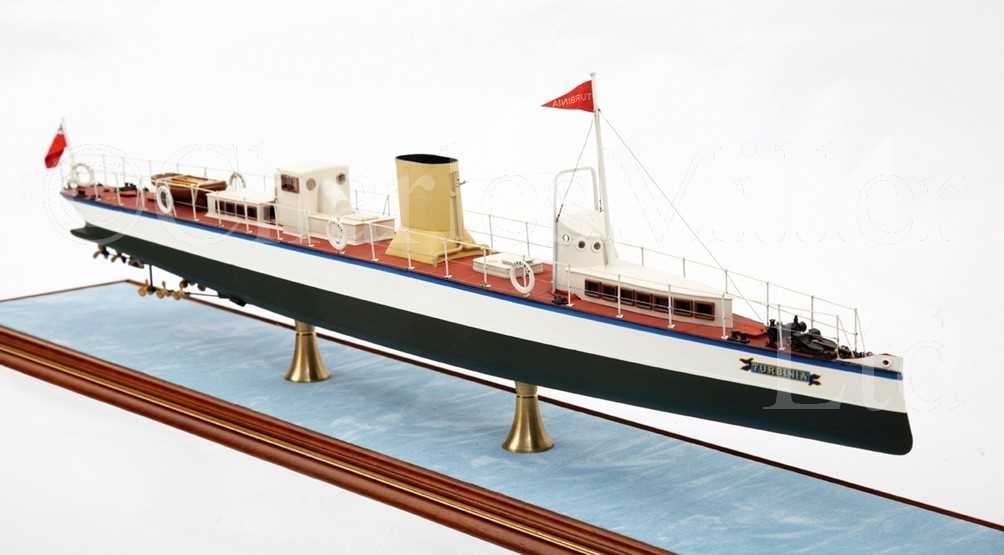 Turnbinia was designed by Sir Charles Parsons, inventor and builder of Parsons turbines. She was built by him in 1894 to test Parsons turbines in service and to demonstrate the advantages of turbine vs reciprocating engine propulsion. Naturally, the fastest type of craft should be used for such demonstrations. It was a sad blow when, powered by one radial flow turbine, Turbinia made less than 20 knots due to cavitation at the high turbine speeds of 1800-2000 RPM. Parsons made many studies of cavitation. The single turbine was removed and replaced by three Parsons parallel-flow turbines, each driving a shaft with three propellers on each shaft as clearly seen in this model.

The Royal Naval Review for Queen Victoria's Jubilee took place at the Spithead in 1897. With all the ships of the Navy, guest vessels, and huge crowds looking on, the tiny (comparatively) Turbinia ripped through the rows of cumbersome naval vessels at an astonishing 35 knots. This bravado display effectively demonstrated beyond question the superiority of steam turbines, and in a very short time successful turbine installations had been made and put in service on coastal steamers. The Cunard Line experimented with turbines in the 20,000 ton Carmania, and then entrusted turbines to their Mauretania and Lusitania. Both ships became world famous, the former holding the transatlantic speed record from 1910 to 1929.

Turbinia was solely a demonstration vessel to show, as she certainly did, the advantages of turbine drive. Her weight of 44½ tons divided by her horsepower gave a very low 49 pounds per horsepower, only to be surpassed five years later by the American Arrow which, even with reciprocating engines, achieved a figure of 36 pounds per horsepower.

Shortly after being photographed alongside the Mauretania, the first large, fast, turbine powered ocean liner, she was laid up on the Tyne. Her after part was retired to exhibition in 1927 in the Imperial Science Museum in London. In 1961 both halves were rejoined in Newcastle on Tyne where she can now be seen.