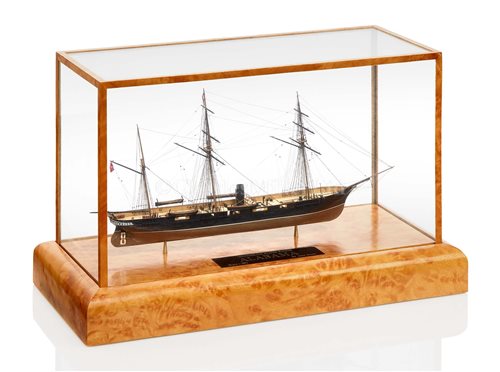 A FINE 32FT:1IN. MINIATURE MODEL OF THE CONFEDERATE RAIDER ALABAMA [1862]
modelled by J. Evans with carved and planked 6½in. hull and decks, plated below the waterline, detailed fittings and armament as appropriate, five fully-fitted ships boats in davits, retractable funnel, masts with standing and running rigging flying the Confederate flag from the mizzen gaff. mounted on brass columns within glazed display case with plaque, measurements overall -- 7 x 10¾ x 5in. (17.8 x 27.5 x 12.5cm.)

Built and launched by Laird's of Birkinhead in July 1862 as the Enrica to evade Union spies, she was classed as a wooden corvette of 1,050 tons and, on the brink of being seized by the British Government, her final sea trial became her first mission. Renamed Alabama at sea she mounted 6-32pdrs and a single, massive, rifled 100pdr. Manned by 145 officers and men she was capable of an impressive 13 knots under steam. Her reign of terror lasted until June 1864 by when she had captured or sunk sixty-seven Union ships valued at nearly $6 million. Refitting and supplying herself from plunder, she was finally forced, leaking and fouled, into Cherbourg for repairs. Here she was cornered by the superior U.S.S. Kearsage which, on the 19th June, forced her into the English Channel. Once free of the 3-mile limit a furious but unequal circling action commenced which had but one outcome. The raider struck her colours but sank before she could be taken and immediately assumed the status of legend in her own lifetime, as well as in the years that followed the bitter defeat of the Confederate Southern States of America.