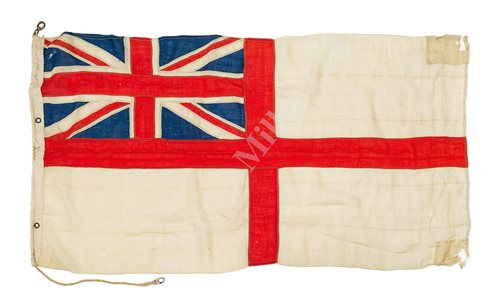 ADMIRAL SIR HENRY BERTRAM PELLY'S WHITE NAVAL ENSIGN, BELIEVED TO HAVE BEEN FLOWN ABOARD H.M.S. TIGER DURING THE BATTLE OF JUTLAND, 31 MAY-1st JUNE, 1916

Admiral Sir Henry Bertram Pelly (1867-1942) commanded H.M.S. Tiger at her commissioning actions at Dogger Bank (24th January, 1915) and Jutland (31st May-1st June 1916).. Neither were terribly satisfactory for Tiger, Beatty's confused signalling at Dogger Bank allowed German ships to escape whilst making Pelly the scape goat; and at Jutland her gunnery was poor - of 303 13½in. shells fired, only three found their mark, whilst she was hit seventeen times with the loss of twenty-four killed and forty six wounded. Never-the-less, Pelly was awarded a CB for his conduct in the action. He was given shore-based posts thereafter and so it seems highly likely this flag was his souvenir from the biggest fleet action of modern times.