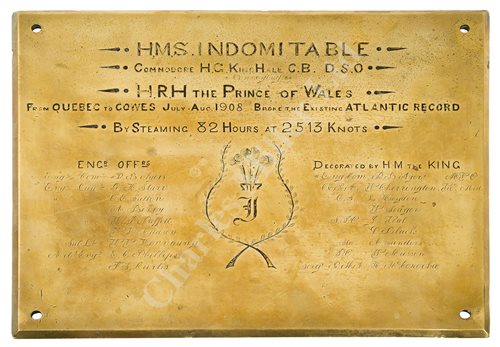 AN HISTORICALLY INTERESTING BRASS PLATE COMMEMORATING THE ATLANTIC SPEED RECORD OF H.M.S. INDOMITABLE, JULY-AUG 1908 WITH THE PRINCE OF WALES ABOARD

inscribed with relevant details, list of engineering officers and officers decorated by the king, flanking an engraved ship's crest -- 10 x 12in. (25.5 x 30.5cm.)

An 'Invincible' Class battlecruiser, Indomitable was part of Admiral 'Jacky' Fisher's grand plan to evolve ever-faster lightly-armoured ships to out-gun an enemy with equivalent or superior fire power whilst remaining out of their range. It was a fatally flawed strategy as was repeatedly proven, but before the trials of War exposed their Achilles heels, they were considered to be amongst the most attractive and swift ships of their scale ever built. Indomitable was designed for a service speed of 25kts, but achieved 26.1 on trials. Fitted with two paired sets of Parsons direct drive turbines powered by 31 Babcock & Wilson boilers, she achieved an extraordinary 48,000bhp for three days in a row, averaging 25.3 kts. during a passage of the North Atlantic, an achievement marked for posterity by this lot.