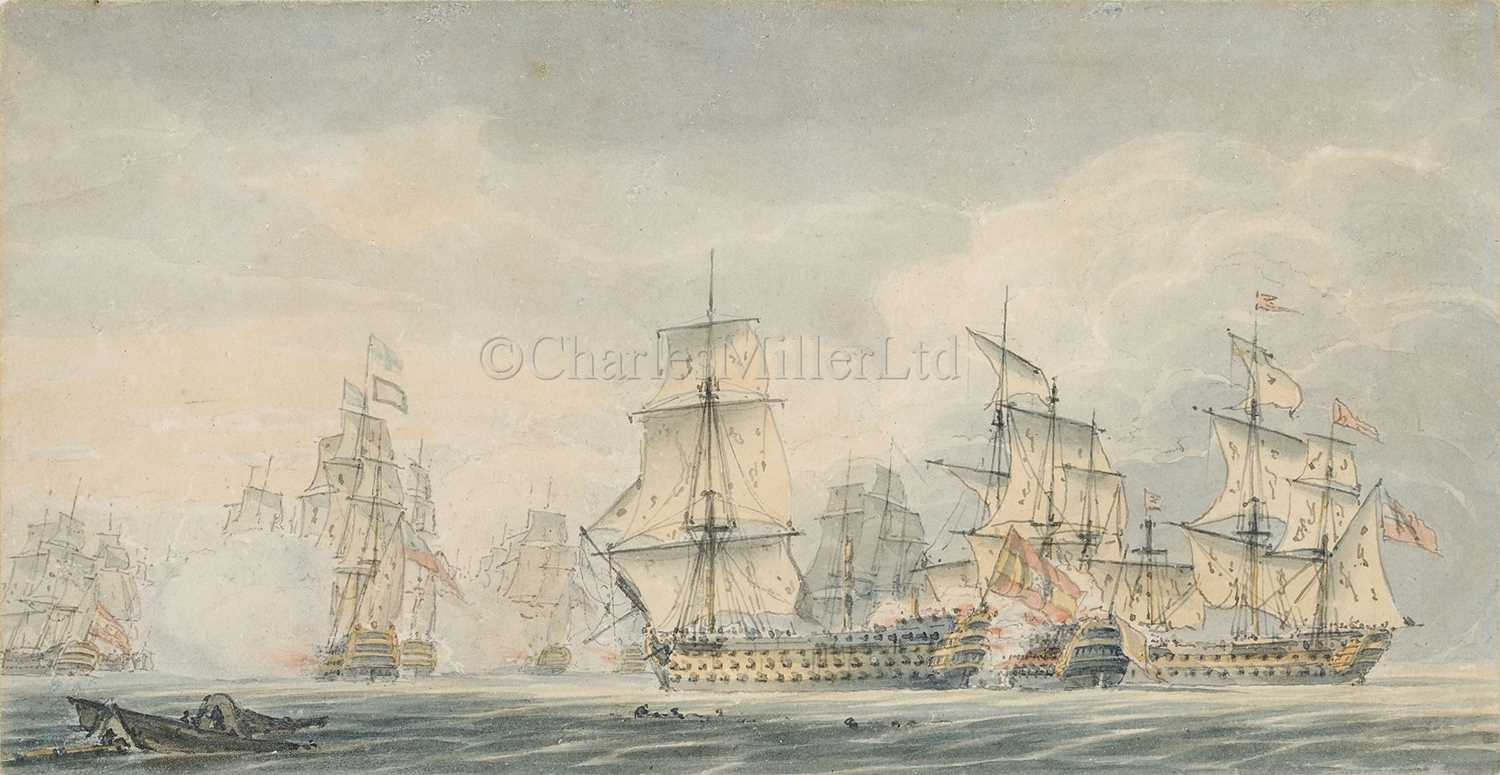 The Battle of Cape St Vincent:

His Majesty's Ship 'Victory', on the 14th of February, 1797, engaging the Spanish Ship, 'Prince of Asturias', and passing through the Enemy's Line; The defeat of the Spanish Fleet on the evening of the 14th of February, 1797, at the time His Majesty's Ship 'Victory' is making the signal for the British fleet to close and cover the prizes

Watercolour over pen and ink

Provenance: With Agnews; believed exhibited at the 1798 R.A. Exhibition, catalogue no. 321

Despite some early successes, notably the battle of the Glorious First of June (1794), the war with Revolutionary France and her allies was not going well for Great Britain as 1796 drew to a close. A Franco-Spanish expedition to Ireland was being prepared and the large but undermanned Spanish fleet was ordered to join its French counterpart already making for Brest. The Spaniards, under Admiral de Cordova, put to sea from Cartagena with 27 ships-of-the-line in company with 12 frigates only to find Admiral Sir John Jervis lying in wait for them off Cape St. Vincent. On 13th February, Jervis was joined by Commodore Nelson's squadron and, the following day, he brought the enemy to action in what proved a landmark victory despite the numerical superiority of Cordova's fleet. Aided by Nelson's tactical brilliance at a crucial moment in the battle, Jervis decimated the Spanish fleet and forced the remnants to withdraw to Cadiz.

Nelson, recently promoted Commodore and given his own, albeit small, squadron, was flying his flag in the 74-gun H.M.S. Captain when he rendezvoused with Jervis in advance of the major engagement the next day. On the morning of the battle, Jervis ordered his two columns of ships into a single line-of-battle but the procedure proved painfully slow and Nelson soon realized that, unless he broke formation, the bulk of the Spanish fleet was liable to get away and run for Cadiz. Without a moment's hesitation, he took H.M.S. Captain out of station closely followed by Collingwood in Excellent and Troubridge in Culloden, whereupon a furious action commenced at the head of the Spanish line. In the confusion, two enemy ships, the 80-gun San Nicolas and the 114-gun San Josef, collided with each other and Nelson seized his opportunity. Laying the already damaged Captain alongside the San Nicolas, he personally led the boarding party which, having captured her, crossed her decks and then took the even larger San Josef immediately afterwards. The men of the fleet dubbed the feat 'Nelson's patent bridge for boarding First Rates', an accolade which delighted Nelson and cemented his growing bond with Jervis. It was, without doubt, a triumph of dash and daring and although Nelson had technically broken his orders to achieve it, he emerged from the battle with his reputation made. Promotion to Rear-Admiral of the Blue and a Knighthood of the Bath followed swiftly, together with a recognition by the British public that they had discovered a new hero to win the War for them.

Unless government advice changes, we will be proceeding with our 7th July sale, starting at 10am, as a live webcast. Please note the following changes to our usual format:

Viewing by appointment only at our Fulham offices. Please call 020 7806 5530 or email enquiries@charlesmillerltd.com to make an appointment.

Lots may not be collected on the day of sale. Collection begins from 10am, Wednesday, 8th July and must be booked in advance.You may also appoint a third party or a shipper to collect on your behalf. Please note that we require your written authority to release to a third party.

Payment is due in sterling at the conclusion of the sale and before purchases can be released. We cannot accept payment in cash at this time. Our preferred method of payment is by electronic bank transfer and amounts over £2,000 must be made by this method. There is a limit of £2,000 on debit cards and £300 on credit cards.

Invoice of under £300 may be paid through our website: https://www.charlesmillerltd.com/account/makepayment

VIEWING BY APPOINTMENT ONLY

You may view by appointment at our Imperial Road Studios during office hours - please call on +44 (0)20 7806 5530 or email enquiries@charlesmillerltd.com to make an appointment.