RELICS OF THE S.S. 'FLYING ENTERPRISE': A LIFE PRESERVER AND A LIFEBUOY 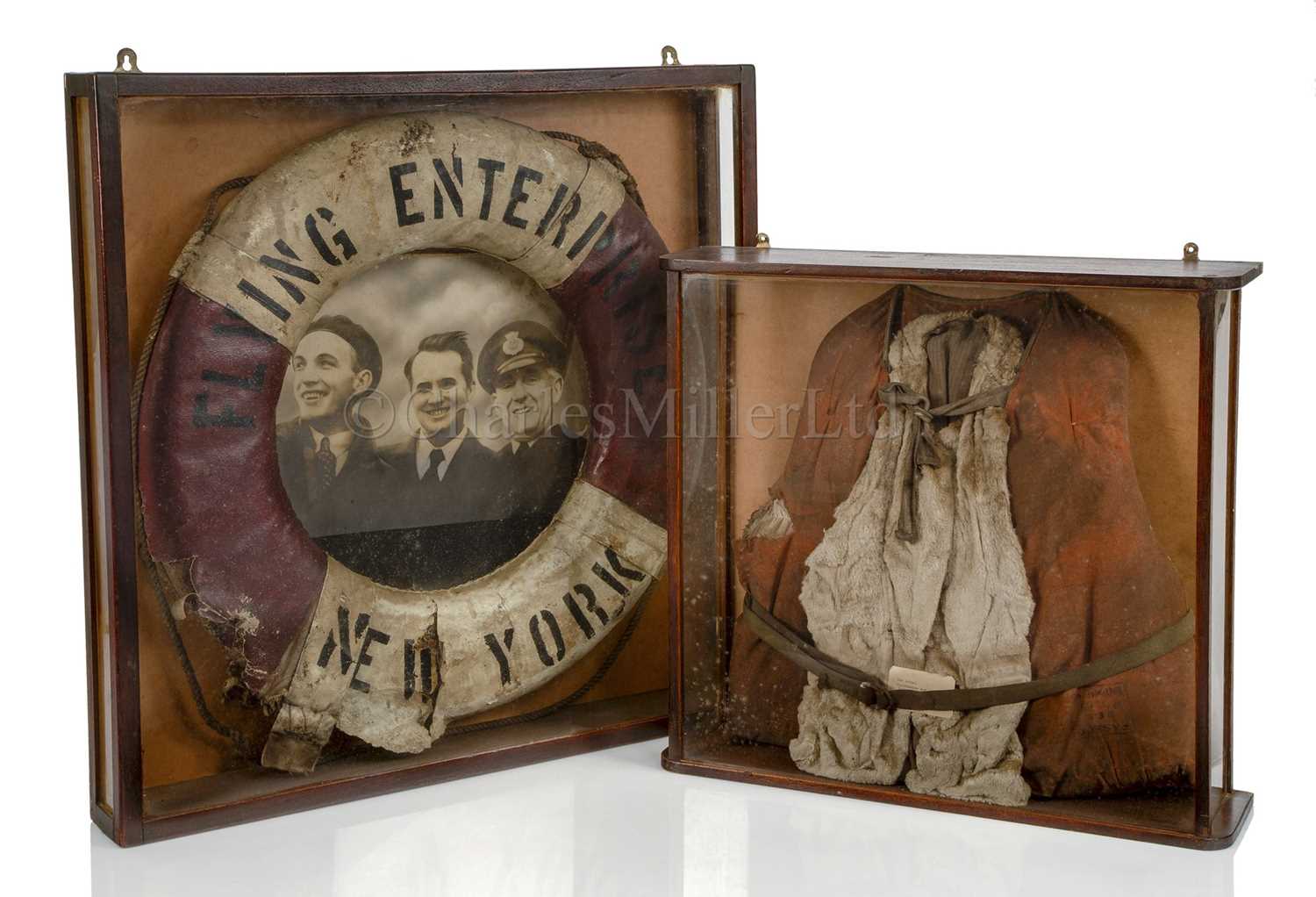 RELICS OF THE S.S. 'FLYING ENTERPRISE': A LIFE PRESERVER AND A LIFEBUOY

RELICS OF THE S.S. FLYING ENTERPRISE: A LIFE PRESERVER AND A LIFEBUOY

Provenance: Given by Capt. Ken Dancy of the tug Turmoil to Jock Drennan, landlord of the Chain Locker pub, Falmouth where he was a regular customer and where framed and displayed until c.1973; later sold and acquired by Drennan's grandson.

The American freighter Flying Enterprise, built in the US in 1944 and registered at 6,711 tons, sailed from Hamburg on 21st December 1951, bound for the United States. Encountering rough weather from the outset, on 28th December, by which time she was about 380 miles west of Land’s End, a crack opened up across her main deck and she took on a list which soon grew to 30° to port. In response to her distress calls, the American ship Southland raced to her assistance and took off the ten passengers and all of her crew bar the master Captain Kurt Carlsen. Soon afterwards the US destroyer John W. Weeks arrived at the scene, followed by the salvage tug Turmoil (Capt. Ken Dancy) on 2nd January. By now, the list of the Flying Enterprise had increased to 80º but Turmoil nevertheless put a line aboard her and began the painfully slow process of towing the stricken freighter back to Falmouth at 3½ knots. Unfortunately, early on 9th January and only 37 miles from safety, the tow parted and could not be rejoined. The next morning Flying Enterprise was listing so badly that Captain Carlsen was able to walk along her now horizontal funnel onto the deck of the Turmoil and, at 4.12pm precisely, she heeled over and sank. In recognition of his almost superhuman efforts to save his ship, Captain Carlsen received Lloyd’s Silver Medal for Meritorious Services in addition to the Merchant Marine Distinguished Service Award from the US Congress.

Although largely forgotten today, the loss of the Flying Enterprise was a sensation in the post-War era, when the unfolding drama was captured on newsreel film and screened across the world, and saw Captain Carlsen hailed as a hero on both sides of the Atlantic.