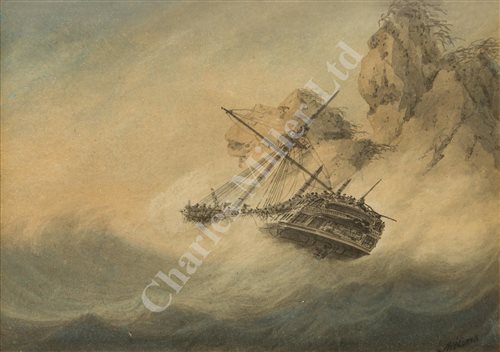 The Wreck of the Halsewell

The Hon. East India Company's ship the Halsewell was wrecked January 1786. Her Captain, Richard Pierce, was taking a large complement of passengers and crew and a mixed general cargo to Bengal, including his two daughters who hoped to find husbands in India - he died holding them as the ship crashed onto the foot of cliffs at Winspit in the teeth of a violent gale. The loss of the ship has been attributed to indiscipline and disobedience amongst the crew. Interestingly, a page from the ship's log book, dated 29th October, 1781, relates an incident in which Captain Horatio Nelson forced the ship to anchor and then impressed all the experienced crew for the Royal Navy, the Halsewell's captain noting in the ship's log "This leaves us with only foreigners and servants".