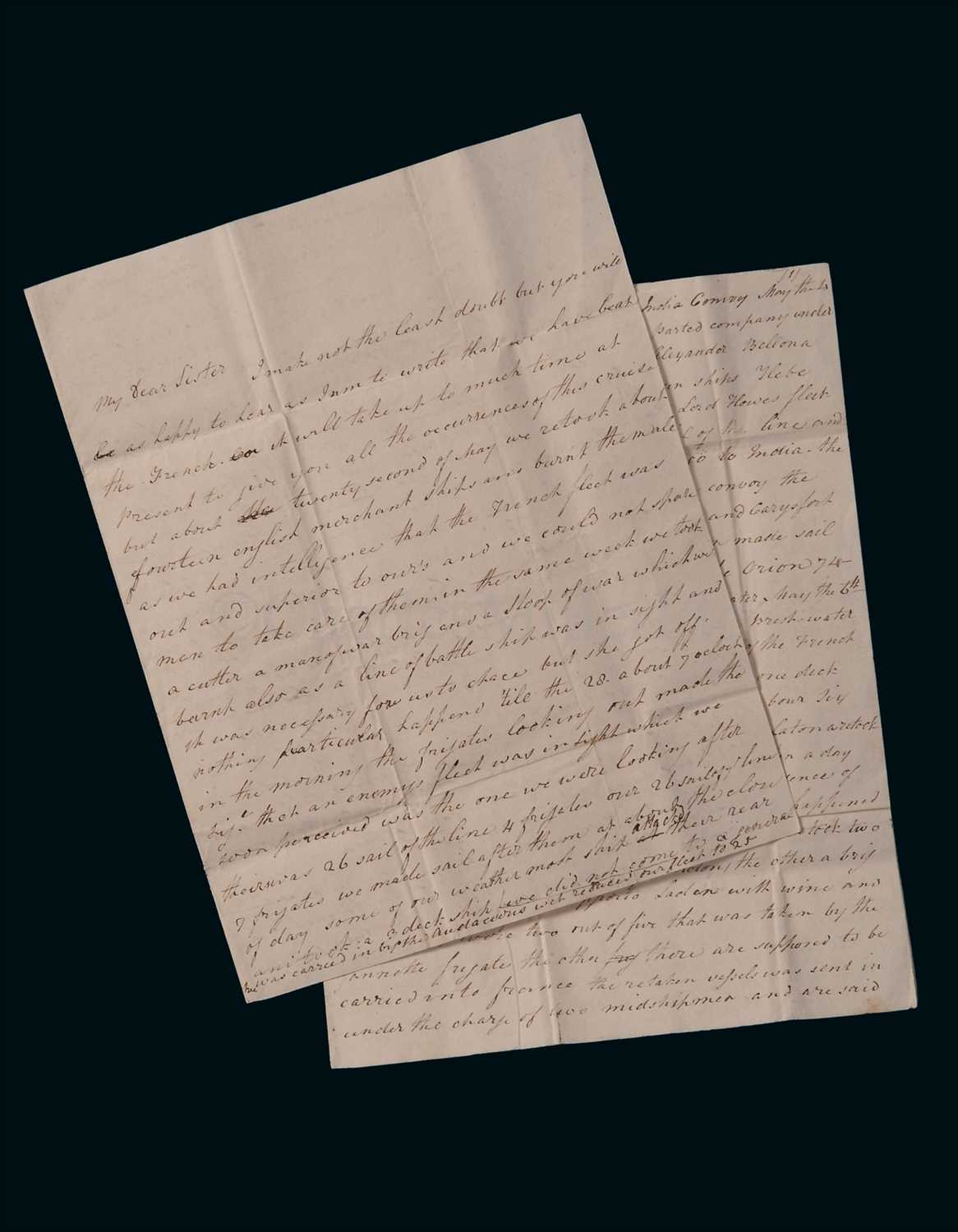 
Share this!
THE GLORIOUS FIRST OF JUNE, 1794: A FIRST HAND ACCOUNT
written by William Burgh (Queen Charlotte) on June 2nd to his sister in a excited but fair hand over six and a half sides (two folded standard size sheets) and enclosing with crossings and corrections, after the initial news I make not the least doubt but you will be as happy to hear as I am to write that we have beat the French, he starts from 2nd May Sailed from St. Helens with the East India Company and proceeds to describe in detail the activities of Lord Howe's fleet and intelligence of the French manoeuvres, captured prizes and values, capturing dispatches, burning captured vessels, then ...Saw the enemys fleet consisting of 30 sail in a line of battle we made the sig to form the line ahead and a stern of the Admiral as most convenient our line was (list of vessels in order) ...but next morning as they had the wind of us we had no other way to bring them to close action but by passing through their line there was 9 ships ahead of us to all passed to Leeward of them so that we were the ship that broke their line and got the weather gage follow'd only by the Bellerophon we recvd the fire of 5 of their largest ships... this ship taking their admiral to engage the Mountain 120 Guns/ we did not fire until we were close of board we got under her stern and began to blaze away having 3 ships upon us as the same time. The French Admiral not liking the salute hauld her wind out of our way, we losing out fore top mast at that time could not get after him, we were in hot Action two hours... after the heat of the action the smoke clear'd away, & the enemy perceived that they had the worst of it.. He then proceeds to describe the post battle trophies: we have taken 6 sail of the line which increase to eleven before he has finished the page and concludes with the state of various ships ending the Queen Charlotte very much damaged I am obliged t finish as the brig is now along side that takes the dispatches. My Love to My brother and the Children am ? sister yours sincerely , W. Burgh with a post script adding We not lost a Ship - I have laid at Q..(missing) first day of (missing) June the 2d - 1794, the exterior addressed to 'Mrs Burgh', sealed in red wax retaining part of edge, further stamped 'Portsmouth Ship LR' and date stamped 'JU 13 94'
Provenance: William Burgh and thence by descent.
William Burgh was created a Lieutenant on 24th July 1794 but died in 1798. He brought home the union flag of the Queen Charlotte which was sold by Christie's, South Kensington along with his kit bag in November 2008 (lot 24). These now form part of the National Collection at Greenwich.